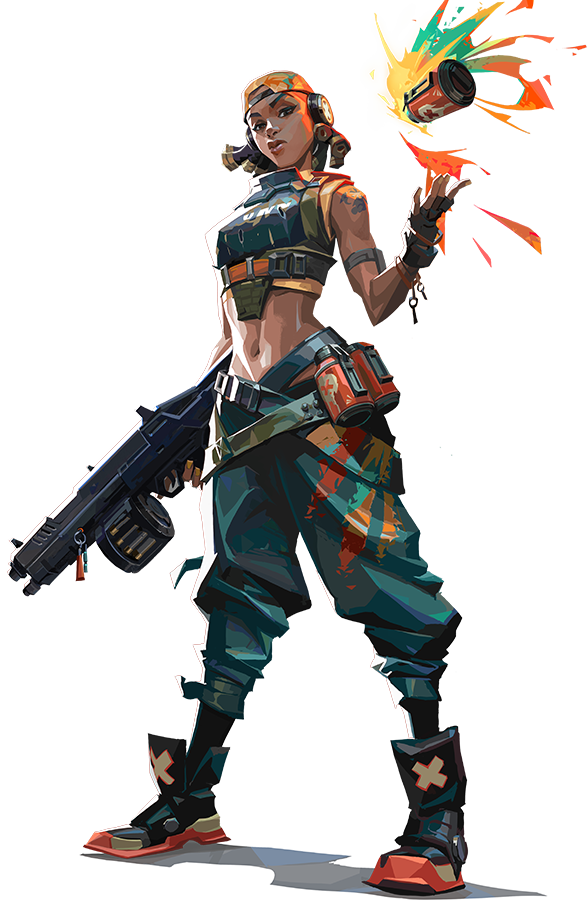 Here is an explosive personality! Raze, duelist, is a formidable adversary. She can inflict heavy damage thanks to her grenades or her explosive robot. Note that her Blast Pack ability can be used to throw herself into the air, without taking damage from it, and can therefore be used cleverly in combat.

If you’re the kind of player that wants to make a lot of damage, Raze is definitely for you.

Raze equips herself with an explosive robot. FIRE to launch a robot on the ground which moves forward in a straight line and bounces against the walls. It explodes and causes great damage if it detects an opponent on its way.

Raze instantly throws a device that sticks to the first surface it encounters. RE-USE the ability after throwing it to make it explode, hurting and moving anything in its range. Raze and her allies don’t take damage from her Blast Pack and can use it to propel themselves into the air.


Raze equips herself with a fragmentation grenade. FIRE to throw the grenade that explodes, making damage around it before dividing into smaller grenades that explode around the first explosion.

Paint Shells can be used again after 2 consecutive kills in the same round.

ULTIMATE - 8 Charges to unlock it.

Raze equips herself with a rocket launcher. FIRE to shoot a rocket that explodes on contact with a player or an obstacle, creating a huge explosion and doing massive area damage.

EN
We use cookies to guarantee you the best experience on our website. If you continue to use this site, we will assume that you are satisfied with it.OkPrivacy policy