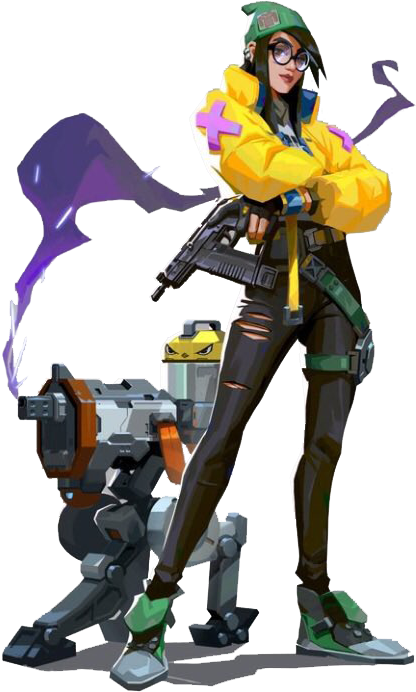 Killjoy is a colourful agent who is part of the Sentinels. A true genius from Germany, Killjoy secures and defends key positions with traps, turrets and mines. Her inventions punish any aggressor too stupid to give up. She controls combat zones and imposes attack or defence timings that are disadvantageous to her opponents. In short, it lives up to its name.

Equip yourself with a nanite swarm grenade.

FIRE to throw the grenade. Upon landing, the grenade will camouflage. ACTIVATE the grenade to deploy a swarm of nanites.

Equip yourself with a camouflaged alarm robot.

PULL to deploy the robot on the ground. The robot makes itself invisible and waits for opponents to pass by. When Alarmbot detects an enemy, it becomes visible and moves towards its victim before exploding. In addition to the damage done, the opponent also suffers the Vulnerable status alteration.

HOLD THE EQUIPMENT KEY to recall a deployed robot.

Equip yourself with a turret.

FIRE to deploy an automatic turret. The turret targets enemies in a wide 180 degree cone. Killjoy can pick up the turret and redeploy it to another location during the round.

EQUIP yourself with a containment device.

PULL to deploy the device on the ground. The device begins to store energy for 13 seconds before exploding over a very large area. Enemies caught in the blast do not take damage, but their movement is heavily impacted for 8 seconds.

The device has 150 VP and can be destroyed.