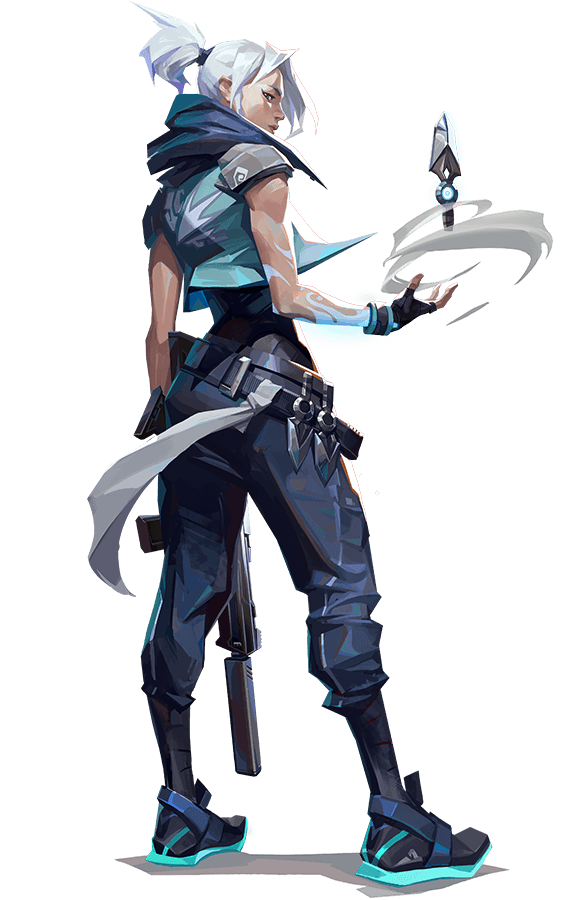 Light and fast like the wind, Jett is a duelist of choice in Valorant. Her abilities allow her to have a very dynamic playstyle. She can dash or throw herself in the air, which gives her a lot of mobility. Her kit, however, allows her to blind enemies with her smoke grenades, but also to inflict heavy damage via her ultimate ability, Blade Storm. Jett if therefore a very complete fighter, who will lead her team to victory.

Jett equips herself with a smoke grenade. FIRE to launch the grenade that expands into a brief vision-blocking cloud on impact with a surface. HOLD the ability to change the path of the shot in mid-flight.

Jett instantly flies through the air, at the height of two crates.

Tailwind
Signature – 1 Possible Use per round.

Activate the skill once to open a 12 second time window. Use the spell again to instantly project yourself in a Jett direction with a dash. The direction of the dash corresponds to Jett’s current movement. If Jett is standing still, Tailwind propels her forward.

Tailwind can be used again after 2 consecutive kills in the same round.

Jett equips herself with 7 throwing knives. FIRE to throw a single knife on a straight and precise trajectory. Jett gets her 7 knives back every time she kills an enemy with one or all of them. ALTERNATE FIRE to throw all remaining knives at the same time.